Micah has unveiled his entitled "Rastafari" riddim. This name appeared following the coronation of Ras Tafari Makonnen in the year 1930 to the supreme title of Neguss Negest (King of Kings) of Ethiopia. Ras Tafari Makonnen is the man better known as Haile Selassie 1st, conquering Lion of The Tribe of Judah. The Rasta movement is a social, cultural and spiritual movement.

If we choose to tell you about the origins of the word "Rasta" in this introduction, it is because today, we will be centering our focus on one of the artists who today represents this movement very particularly : Micah Shemaiah, and more specifically his project The Lion of Judah Riddim, recently released via We Generation Music

Micah Shemaiah, for those who know of this artist, is certainly the one who in the current music industry is an emblematic figure of the roots/natural form. Letting himself be guided by the Almighty, living a natural life, preaching a conscious message through his words thought for the elevation and inspiration of the spirit, this is how Micah Shemaiah lives and thinks. With The Lion of Judah Riddim, the artist comes to highlight the talent of singers who like him are true messengers, who create music that inspires and elevates the mind. The singer told me in one of our discussions that this project was a reflection of his thoughts at 28, a pride to be able to discover the resurgence of the roots of Rastafari and Livity through this project. 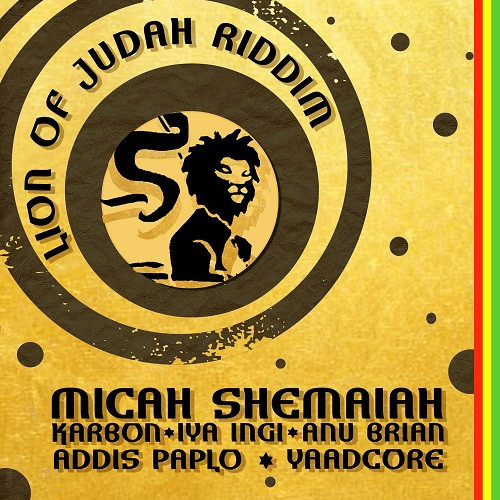 On the other hand, the instrumental part starts with a small intro including some R'n'B acoustic guitar chords and the roar of a lion. These few small elements could be seen as fairly representative of what awaits us through this meditative journey of The Lion of Judah Riddim. The skank of the guitars ring of the roots aspect, the R'n'B chords more of the current world. The riddim is built in its entire length in this same shape, and one can only realize it when one listens to it carefully. Between the bass tones or percussive beats, the influence of the whisper and the vibrato of the melodca or the organ, Micah Shemaiah gives us a diaspora his talent as a musician while being personnally behind the majority of the live instruments. An instrumental composition signed Micah Shemaiah and Girma Davis.

The roaring lion would symbolize the singing Lions who came to lay their voices on this Roots/R'n'B instrument. The first talent to come sound the charge or should I say to blow his mystical vibe is Addis Pablo which we talk about regularly in our columns. The son of the great Augustus Pablo, mythical melodica player, infuses the same career as his father with his instrument of choice. The addition of the melodica on Addis's "Singing Lion" which uses his instrument as a voice brings this mystical vibration to the riddim. Spiritual journey assured.

Note that Addis Pablo recently unveiled the first single from his future album.

Then follows "Fly Anu " with Anu Brian and his slightly rocky voice, his limpid flow and almost soul oscillating between tenor voice and almost falsetto at times. Speaking of vocal performances, this Lion of Judah Riddim is very full, each track pulling out different sounds. Every artist who brought his own little thing.

The third roaring lion is Iya Ingi. This young singer describes himself as a liberal Ethiopian fighting for Ethiopian sovereignty. An artist whose father played a very active role among the Twelve Tribes of Israel before being repatriated to Ethiopia in 1994. On "Iration Balance", Iya Ingi oscillates between sung text and almost rapped lyrics to remind us that Jah has created everything in perfect balance. The singer also refers to Marcus Garvey in his text, emblematic figure of the black cause, considered one of the first animators of the Rastafari movement, just like the Reverend James Morris Webb and Leonard Percival Howell, who was one of the first men to show that another way was possible for this people reduced to slavery with the creation of the Pinacle. By the way, the name of Iya Ingi is a wordplay with Nyabinghi, you probably guessed it !

On the fourth title of this Lion of Judah Riddim, the artist Karbon shouts his dismay at the injustice and oppression in this world with "Lions Roar". Karbon’s interpretation built a little like a sermon brings an almost Mento, or Nyabinghi dimension to the riddim. It’s right, it’s powerful and it’s on point.

This beautiful musical production could not be what it is without the influence of Micah Shemaiah who for the fourth track delivers his own message. Lion of Judah "speaks to us of personal and spiritual faith, a humble trust in us that we all need to face Babylon. Magisterial, elegant. From the great Shemaiah. The singer will appear again on October 16th with "Jamaica Jamaica", his new single.

The singjay who closes this project is Yaadcore. Yaadcore is a singer who is already quite well known on the front of the musical scene in Jamaica and who we are only beginnong to discover in France. He is also Protoje's DJ whose influence is perceived in his interpretation on "Nyquill" (Spliff a Light Spliff), here on this riddim. On the lyrics side, the singer returns to the criminalization of cannabis and the recurrence of the problems it causes under Babylon.

With this Lion of Judah Riddim, Micah Shemaiah reveals a new dimension of his talent and at the same time embarks the singing lions of his generation who represent the roots, the mystic and who elevate and inspire the spirit. A great success making thanks to the rastafari roots while inserting some more modern touches. Ingenious Mr Micah Shemaiah.