Kunda - a DubPoet for History

We’ve been lately revealing to you different artists who regularly voiced the two Official Staff instrumental riddims in collaboration with our webzine.

Today, let’s focus on Kunda. Historian, philosopher and poet, Kunda draws all his cultural knowledge from his search for his origins and passes his message on, through poetry. Messages carrying heavy facts of the past (like triangular slave trade, middle passage…) as a memoriel duty of remembrance, give the Dub Poet today the possibility to express himself musically by releasing his very first single " Slave Ship ", composed by Official Staff.

Through these few lines, we’re really proud to present to you what Kunda’s singular universe is all about : Dub Poetry for History. It is obvious that the term Dub Poet reminds inevitably the great LKJ and Kunda really has this potential.

His tremendous interpretation has knocked Mamats/Official Staff and Omar Perry so much on their feet, that they’re already working with the Dub Poet on his forthcoming projects. In the meantime, listen to this discovery, and enjoy ! We’ll get back to you shortly for some more info about Kunda, so stay tuned.

Kunda is a Dub Poet who can be compared to LKJ, Mutabaruka or Gainsbourg and Grand Corps Malade. Aged 63, Kunda was born in Jamaica but spent his early years of youth in the United States. When he was a child, he enjoyed watching martial arts movies, especially those where Bruce Lee appears. This will lead him to apply for a martial arts school and learn the art of defence. Kunda ressources himself in this discipline, where he also draws his strength, spirituality and the right balance in his daily life. In the seventies he applies for a welding school and gets his Master Welder diploma.

Kunda has had another passion since he was a little kid : reading historical books. History will become more than a passion during the following decades because he’s now become a philosopher, an historian and a teacher.

Back to his native land 20 years ago, Kunda was stunned by the ignorance of people and shocked to noticed at which point people had forgotten their troubled past. A cultural lack filled with an intense motivation for writing poetry.

His finest composition carries an increased will of transmiting his knowledge he’s obtained during his years of studies and research, it’s a duty of remembrance inspired by his origins, his culture, and by the Human being (with a capital « H »), man in all his best and worse dimensions.

The story of Slave Ship

Realization of Kunda’s first song happened when his friend Omar Perry introduced him to Mamats, who initiated a riddim project supported by La Grosse Radio. Omar proposed Kunda to record some poetry on an Official Staff instrumental riddim.
Omar set up the voicing, made cleared arrangements, and sent a first bounce over. The whole staff welcomed this song with a big enthousiasm and there we go !
Birth of " Slave Ship ".

" Slave Ship " tells about this period when Jamaica and Kingston harbour were one of the many detinations for slave trade, including a bad things that happened to all these people at that time. Backing vocals harmonies were voiced by Omar Perry on the choruses, mixdown was done by Doc Bandol. This very first track is the beginning of a strong collaboration. 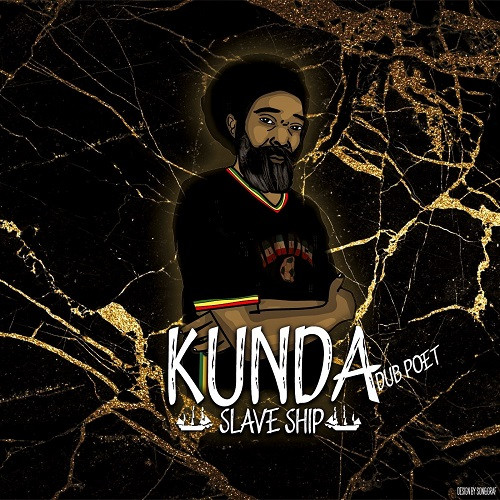 Afrikan's from the interior
Oh, they felt the horror
Loading on the slave ship
It was a pre-dawn raid, read the page
It was a long journey to the sea, a sea
Sound of the roar something we never seen or heard before
We were thrown in the dungeon and the Pits waiting to be loaded on the ship
The screaming and the yells it's like a trap door open into hell
Loading on the slave ship

By the crack of dawn were sailing the sea through the middle passage
Oh, that stormy passage
Leaving our home, knees and elbows worn down to the bone
Some get throw off, some chuck off
Give thanks to some our ancestors that took off
All the shark a follow the crafts all the way to the wharf
Right smack in a down town Kingston the central enslave port station of the Caribbean.
After that 90 day trip, some arrive sick some look like stick, mad sick
Before we landed we were branded our body become paper stamps for their brand
England France Portugal Spain Belgium Even the dames were part of the scheme

Oh, we felt the horror
Landing in Jamaica
Loading on the slave ship

On the slave ship